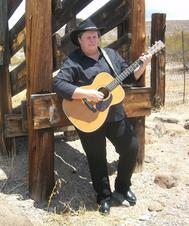 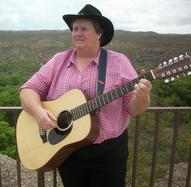 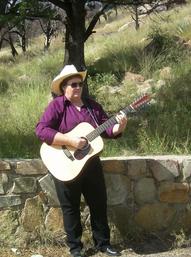 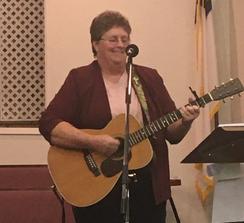 She also became more interested in learning all those chords she couldn't play before.  Slowly but surely, she began to be able to play more chords and had more of a "feel" for playing.  As more chords came, and more different chord progressions, then more songs came too. 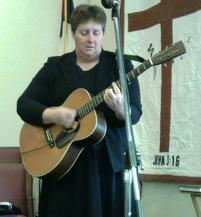 After being married for several years, Sonja and her husband Mike went to her property where she had lived many years before and were going through some items to decide what to do with it all.  In a closet in the back room, Mike found her old guitar and another guitar with no strings and a hole in the body.  It was her dad's old guitar that she had began learning to play on!  They took them home and put the damaged one in the shop for repairs.  When she got it home and strummed the strings the first time, it was like it opened up her eyes!  She had started writing songs a few years earlier, but seemed bogged down and unable to get writing again.  But the "new" guitar seemed to bring on inspiration that she had been lacking!  Her writing then took off!

Sonja began playing trumpet in the school band during 6th grade.  When the band director asked if anyone would be interested in playing trombone to help round out the band a little better, Sonja volunteered.  She only played trombone for one year and then went back to her trumpet.

In high school, Sonja played in the marching band, concert band, and for one year in the jazz band at the school she was attending at that time.  During her junior year, the director asked if anyone would like to play the alto trumpet.  Sonja volunteered again!  So she played alto trumpet during marching band, and then trumpet and french horn during concert season.

But in the background was always the guitar.  She never had the desire to play lead, but wanted to be able to play chords and sing songs.  It just seemed like she couldn't quite learn and remember how to play a lot of chords.  So she began playing less often.

Sonja was soon able to start going to churches and singing some of her songs.  She has sang at picnics, ladies retreats, conferences, church services, and for other special occasions.

Soon, with the help of Nolan and Sheri Jones, Sonja Watkins - Country began!  They were able to go into the local nursing homes to play and sing classic country music for the residents.  It was a great time and was enjoyed by all!  Unfortunately, Covid-19 put a stop to all nursing home activities.

But during this awful time, a new business opened and was soon offering live music outside on their patio.  Sonja spoke to the owner and it wasn't long until Sonja Watkins _ Country was playing there!  After a short break during the coldest part of winter, they are now playing twice a month out on the patio and enjoying every minute!

Sonja's mom was a wonderful alto, and began teaching Sonja how to sing along with records and 8-track tapes when she was very young.  And the music was quite varied...Eddy Arnold, Tammy Wynette, Merle Haggard, Elvis, The Gaither's, Hank Williams, and even Creedence Clearwater Revival!

Her folks were divorced, but she was able to spend time equally with both her mother and father.  Her dad played guitar, and taught her a few chords.  By 8 years of age, she had her own guitar and enjoyed learning songs to play and sing.  She then was able to occasionally sing in church.

Even though music wasn't the main thing going in Sonja's life, music was always there!  She remembers helping her mom clean house on Saturdays, and the stereo was always turned up loud as they worked.  At her dad's house, he didn't have a television, so music was always playing!  He was a big fan of classic country music and Sonja grew up listening to the likes of Jim Reeves, Bob Wills and the Texas Playboys, Jimmie Rodgers, Buck Owens, and Patsy Cline.

At school, when friends talked about their favorite music groups, Sonja was not even aware of who they were!  She was completely involved in country music and the music she heard at church.