I began learning guitar when I was about 6 years old.  My dad showed me a few chords and I took it from there.  I learned a few songs that my mom and I sang in church, and a few that I learned from listening to records.  For several years, I didn't even pick up the guitar.  Once I began writing songs, the guitar became more important to me!  I inherited my dad's 1958 Martin 000-28 and it seemed like my songwriting really took off!  I enjoyed playing again.

After a while, I took an interest in playing the bass, and my husband got me one and told me to play it!  Then later, he got me a mandolin and I really enjoy trying to learn it.  The banjo he got me is really a challenge!  And so is the pedal steel that was given to me by some friends.  But I will keep on plugging away at them!

In 2007, after a very difficult time in my life, the Lord began giving me tunes and words.  I could not get these out of my head, so I finally relented and wrote them down!  I had not intended to write songs.  I was busy with other things in my life.  But when God wants you to do something, He won't let you ignore Him!

Music has always been an important part of my life, but mostly as a listener.  I grew up listening to my dad's music - Jimmie Rodgers, Bob Wills, Buck Owens, Jim Reeves, Hank Williams, etc., and my mom's - Tammy Wynette, Eddy Arnold, Merle Haggard, etc.  They divorced when I was quite small, but I spent time equally with them both.  I heard this music every day!

Once I learned a few chords on the guitar, my mom and I would occasionally sing at church.  But mostly, I listened to music.  Along with the music I grew up listening to, I also enjoyed George Strait, John Conlee, Kentucky Headhunters, Charlie Daniels, The Eagles, CCR, and others.

I had the wonderful opportunity to attend the Gaither Songwriting Intensive in Alexandria, IN back in 2016.  Four days with people like Jimmy Yeary, Cindy Morgan, The Getty's, and Bill and Gloria Gaither, learning about the art of songwriting!  It was a great experience! 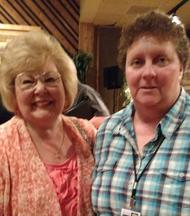